Watch: The Wedding of King Philippe and Queen Mathilde of Belgium 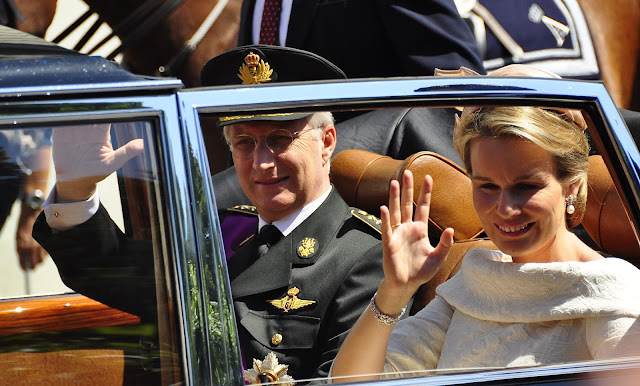 The wedding of King Philippe and Queen Mathilde on December 4, 1999, was hailed as Belgium’s wedding of the decade.

The King, then Duke of Brabant, is the eldest son of King Albert II and Queen Paola. Mathilde, meanwhile, is the daughter of Patrick d'Udekem d'Acoz, a Belgian nobleman. Her mother, Anna Maria Komorowska, traces her lineage to the Princes Sapieha and Counts Komorowski of Poland.
It is not known how the two met and little is also known of the prince’s relationship with Mathilde, a speech therapist, until their engagement was announced in September 1999. She easily won the hearts of millions of adoring Belgians, thanks to her “youth, charisma, and beauty.” Interestingly, upon their accession to the throne in July 2013, Mathilde became the first-ever Belgian queen to be born in the country.

The couple were first wed in a civil ceremony at the Gothic Brussels Town Hall in the French, Flemish Dutch and German languages. Mathilde wore a bridal gown designed by Edouard Vermeulen while Philippe was wearing his uniform as Belgian Air Force colonel. They proceeded to the Cathedral of Saint Michel where they tied the knot in the Roman Catholic ceremony. In the evening, a reception was hosted by the groom's father, King and Queen, in the Chateau de Laeken. Mathilde automatically became Duchess of Brabant and a Princess of Belgium after their wedding.

Despite the extremely cold weather, some 50,000 people lined the streets of Brussels to greet the couple. Pop culture academics hailed the wedding for its unifying effect among the Belgians and for spreading positivity in a country  scarred by rift. However, a report by BBC said that political commentators in Belgium commented that the magnitude of Belgium’s national divide was too great that no romantic royal wedding could ease the tension. Still, at least for a today, kingdom was one as they tuned in to the fairy tale wedding that caught the imagination of every Belgian.

The only fact about this historical meme is that at that time, it was fashionable for Persian women to wear mustache. “Many Persian-language sources, as well as photographs, from the nineteenth century confirm that Qajar women sported a thin mustache, or more accurately a soft down, as a sign of beauty,” explained Dr. Afsaneh Najmabadi. The memes and fake stories circulating online refer not to a single princess, but actually to two female dynasts: Princess Fatemah Khanum"'Esmat al-Dowleh" and her half-sister, Princess Zahra Khanom Tadj es-Saltaneh. Their father, Naser al-Din Shah Qajar, ruled Persia from 1…
39 comments
Read more....

August 09, 2016
King Edward VIII leaped into financial uncertainty the moment he signed the Instrument of Abdication on December 10, 1936. That same day, Edward, now known as Duke of Windsor, entered into an agreement with his younger brother and successor, King George VI, that secured him £25,000 annually for the rest of his life. However, the King later renounced this agreement and instead offered him a smaller amount which would cease upon the King's death. The condition is that Edward should never step into British soil unless invited by government.
8 comments
Read more....

The Queen wears the Girls of Great Britain and Ireland Tiara when she met the Australian entertainers…
1 comment
Read more....