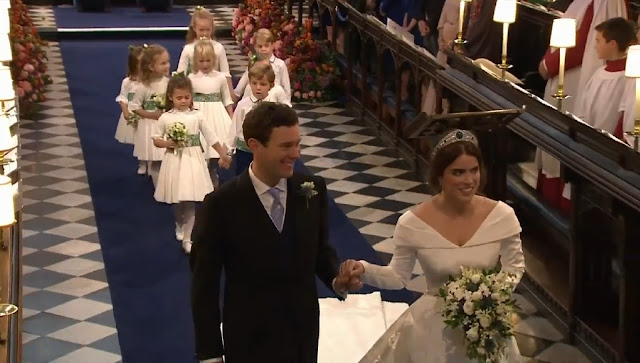 When Princess Eugenie of York married Mr. Jack Brooksbank, it was not only the first time that she wore a tiara in public, it was also the first instance when one of the British Royal Family’s most precious tiaras surfaced after being locked up in the royal vault for over seven decades. Contrary to popular speculation that Princess Eugenie would wear her mother’s York Diamond Tiara, the bride, instead, borrowed The Queen’s Greville Emerald Kokoshnik tiara.

The tiara was originally created by Boucheron for to society hostess The Hon. Mrs. Herman Greville in 1919. According to the Royal Order of Sartorial Splendor, Mrs. Greville “was a social climber,” “a snob” and gossipy lady. Cecil Beaton also describes her as a “galumphing, greedy, snobbish old toad who watered her chops at the sight of royalty and the Prince of Wales’s set, and did nothing for anybody except the rich."

The tiara was designed in the kokoshnik style, which was popularized by the members of the Russian Imperial Family. According to the Royal Family’s website, it is “made of brilliant and rose cut diamonds pavé set in platinum, with six emeralds on either side,” although only four or five to a side are visible. In the book Boucheron: The Secret Archives, it is revealed that the tiara’s oval central emerald is a whopping 93.70 carat—a huge fortune, indeed!
Embed from Getty Images

In an interview with MailOnline, James Constantinou, owner of Prestige Pawnbrokers, explained that “the tiara’s strong historical provenance, from Mrs Greville to the Queen Mother, and now the Queen, an elegant jewel such as this would be estimated to fetch £5million to £10million at auction.”

When Mrs. Greville died in 1942, she bequeathed much of her jewelry collection to Queen Elizabeth (later the Queen Mother). She later wrote to Queen Mary: “I must tell you that Mrs Greville has left me her jewels, tho' I am keeping that quiet as well for the moment!

“She left them to me 'with her loving thoughts', dear old thing, and I feel very touched. I don't suppose I shall see what they consist of for a long time, owing to the slowness of lawyers & death duties etc, but I know she had a few good things.

Apart from everything else, it is rather exciting to be left something, and I do admire beautiful stones with all my heart. I can't help thinking that most women do!”

Since it fell on royal hands, the tiara was never seen in public. When the Queen Mother died in 2002, Queen Elizabeth II inherited her mother’s jewels and in this case, the Greville Emerald Tiara was passed on to her, too. It would have to wait until Princess Eugenie’s wedding on October 12, 2018 to resurface in public.