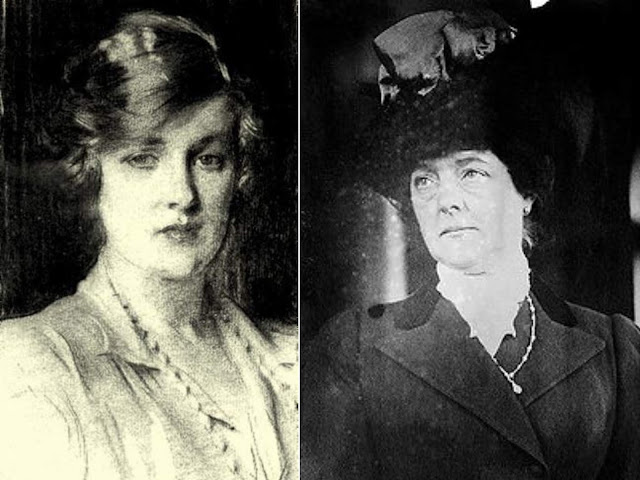 Born on October 27, 1857 in New York City, New York, U.S.A., Frances Ellen Work was the daughter of renowned stockbroker Franklin H. Work—a self-made man who was a protégé of Cornelius Vanderbilt—and his wife Ellen Wood, whose mother had connections with eight American presidents and other notable personalities such as Orson Welles, Humphrey Bogart, General Patton. She was affectionately referred to as “Fannie”. According to her New York Times obituary, Frances was "considered a great beauty in her youth”.

Frances married Hon. James Boothby Burke Roche (later 3rd Baron Fermoy) on September 22, 1880 at Christ Church, New York City. The union produced two daughters and twin sons. The first child, Eileen (1882−1882), died young. The second, Hon. Cynthia Roche (1884−1966), married firstly Arthur Scott Burden (1879−1921) in 1906 and secondly Guy Fairfax Cary (1879−1950) in 1922. She is the matrilineal great-grandmother of American actor Oliver Platt. The third child, Hon. Edmund Maurice Burke Roche (1885–1955), later became the 4th Baron Fermoy, and was the maternal grandfather of Diana, Princess of Wales.  The fourth, Hon. Francis George Burke Roche (1885–1958), was a banker who died unmarried.
In 1891, Frances divorced James for desertion. Eight years later in 1899, her former husband who was then a Member of Parliament, sued her with Writ of Habeas Corpus for depriving “the child of her liberty”. The case was settled out of Court not long after.

Frances married her second husband, Hungarian-born society horseman Aurel de Batonyi. The heiress would sue the riding instructor for divorce two years later, purportedly after her father threatened to disinherit her if she carried on with the marriage. Franklin, who died in 1911, left Frances and the rest of his family an estate of nearly $15,000,000, with a note that said not a piece of his fortune was to go to his "erstwhile son-in-law, James Boothby Burke Roche”.

Frances "was for more than sixty years a well-known figure in international social circles”. She was friends with Mrs. Reginald Vanderbilt and was a prominent figure in Rhode Island, New York, and Newport social sets. In 1892, self-appointed New York society arbiter Samuel Ward McAllister included Frances in his “Four Hundred”, which was said to be an index of the best families of New York. Four hundred was purported to be the number of people that could fit into the ballroom of Mrs. Caroline Schermerhorn Astor, who topped the said list for many years.

July 11, 2018
Princesses Qajar: Princess 'Esmat  (left) and Princess Fatemah of Persia (right).  A Persian princess viral news websites baptized as Princess Qajar has lately become a stuff of legends. She was presented as a royal lady with a facial hair that made her so attracted that 13 men claimed their own lives because she couldn’t love them. The truth is, there was no “Princess Qajar,” only the Qajar dynasty  that ruled over Persia for more than a century. The only fact about this historical meme is that at that time, it was fashionable for Persian women to wear mustache. “Many Persian-language sources, as well as photographs, from the nineteenth century confirm that Qajar women sported a thin mustache, or more accurately a soft down, as a sign of beauty,” explained Dr. Afsaneh Najmabadi. The memes and fake stories circulating online refer not to a single princess, but actually to two female dynasts: Princess Fatemah Khanum"'Esmat al-Dowleh" and her half-sister
148 comments
Read more....

January 01, 2019
From left to right - Princess Marie Louise wearing the Cartier Indian Tiara during the coronation of Queen Elizabeth II in 1953; Prince Richard, Duke of Gloucester, who inherited the tiara; Birgitte, Duchess of Gloucester. Images from Wikimedia Commons. Princess Marie Louise was one of the most well-loved members of the British Royal Family. Born on August 12, 1872, she was the second daughter and fourth child of Prince Christian of Schleswig-Holstein and his wife, Princess Helena of the United Kingdom, daughter of Queen Victoria. The family lived close to Queen Victoria, thus, the princess and her siblings grew up under the watchful eyes of her grandmother. In 1891, she married the "very tall and good-looking” Prince Aribert of Anhalt but their relationship did not take off and their marriage was annulled. Though the cause of dissolution was never revealed, it is believed that Aribert's alleged homosexuality or bisexuality—specifically an act of indiscretion with a ma
1 comment
Read more....

February 17, 2020
The Earl and Countess of Strathmore and Kinghore (left) with the Duke of York and their daughter, Elizabeth, c1922. Image from Wikimedia Commons Queen Elizabeth II’s maternal grandparents were the Earl and Countess of Strathmore. They were the parents of Queen Elizabeth the Queen Mother , who was born in Scotland. The Strathmores could claim ancestry to the Scottish king Robert the Bruce and they were also Scotland’s largest landowners. They were a “sporting, military family, their politics were conservative and their style old-fashioned” family. It was customary among the wealthy those days to divide their time among their many homes and the Strathmores were not short of houses. They had Glamis for an official family seat, where late summers and early autumns were spent. The elegant Queen Anne mansion of St Paul’s Walden Bury in Hertforhshire would serve as their weekend retreat. This was also the home of Lord and Lady Glamis before Lord Glamis succeeded his father to the
1 comment
Read more....