It is disappointing to know that Queen Elizabeth II has decided to skip Remembrance Sunday Service after spraining her back.

The Queen's spokesperson said it was the Queen's "firm intention" to attend the service, after previously backing out from previous engagements due to health concerns.

The Queen's decision to cancel her appearance at the Cenotaph in London came "with great regret".

This is a blow. A blow to those gathered here on Whitehall on a grey November morning, a blow to the many who had hoped to see the Queen after a fortnight of rest, and without doubt a blow to the Queen herself - Remembrance Sunday is when she, who has devoted her life to service, pays her tribute to those who served.

It seems that for the 95-year-old sovereign, the trip from Windsor Castle to Buckingham Palace and standing in the cold to watch the ceremony seems just too much to bear. 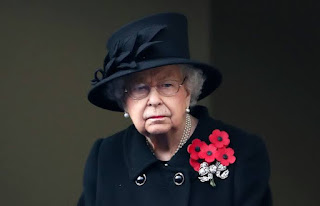 July 11, 2018
Princesses Qajar: Princess 'Esmat  (left) and Princess Fatemah of Persia (right).  A Persian princess viral news websites baptized as Princess Qajar has lately become a stuff of legends. She was presented as a royal lady with a facial hair that made her so attracted that 13 men claimed their own lives because she couldn’t love them. The truth is, there was no “Princess Qajar,” only the Qajar dynasty  that ruled over Persia for more than a century. The only fact about this historical meme is that at that time, it was fashionable for Persian women to wear mustache. “Many Persian-language sources, as well as photographs, from the nineteenth century confirm that Qajar women sported a thin mustache, or more accurately a soft down, as a sign of beauty,” explained Dr. Afsaneh Najmabadi. The memes and fake stories circulating online refer not to a single princess, but actually to two female dynasts: Princess Fatemah Khanum"'Esmat al-Dowleh" and her half-sister
180 comments
Read more....

The Duchess of Windsor’s Jewels

June 26, 2020
Edward, Duke of Windsor, the former King Edward VIII, showered his wife, the twice-divorced American Wallis Simpson, with love and affection. And he equated this love and affection with priceless jewels that served as the basis of her multi-million dollar estate at the time of her death. As king, but for only less than a year, Edward had the means to buy her all the precious jewelry he could. Socialite and diarist Sir Henry “Chips” Channon observed that Mrs. Simpson’s “collection of jewels is the talk of London.”   He also wrote: “The King must give her new jewels every day….He worships her…The king is insane about Wallis, insane…Cartier’s are resetting magnificent, indeed fabulous jewels for Wallis, and for what purpose if she is not to be Queen?” Sadly, a number of these precious jewels , at £20,000 (already a fortune then) were stolen in 1946 while they were staying at the Earl of Dudley’s home, the Edenham Lodge. It was initially rumored to have been perpetrated by the
2 comments
Read more....

Queen Elizabeth II and her Tiaras

November 10, 2016
Queen Elizabeth II is known for her extensive and priceless collection of jewelry. The tiaras that we feature in this article do not belong to the Crown Jewel, which are held in trust for the nation. They are rather the personal property of the sovereign. These tiaras have history that spanned hundreds of years and have seen alteration as they changed hands. Here are some of the most fabulous tiaras in the Queen's collection!
3 comments
Read more....