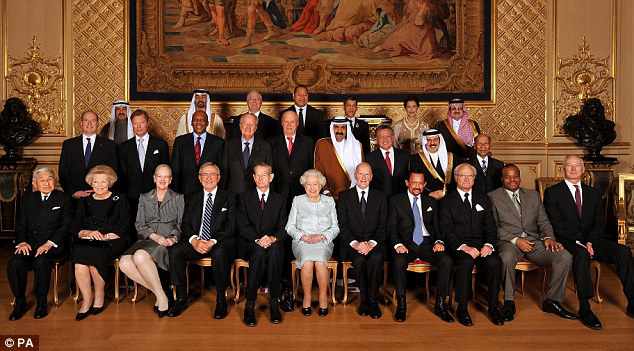 The image above shows the different monarchs from the different parts of the world. Front row, left to right, seated are Emperor Hirohito of Japan, Queen Beatrix of the Netherlands, Queen Margrethe of Denmark, King Constantine of Greece, King Michael of Romania, Queen Elizabeth II, King Simeon of Bulgaria, The Sultan of Brunei, King Carl of Sweden, The King of Swaziland, and Prince Hans-Adam II of  Liechtenstein. Middle, left to right are  Prince Albert of Monaco,  The Grand Duke of Luxembourg,  The King of Lesotho, King Albert II of Belgium, The King of Norway,  The Emir of Qatar, The  King of Jordan,  The King of Bahrain, and The Yang di-Pertuan Agong of Malaysia.  On the top row, left to right, are Nasser Mohamed Al-Jaber Al-Sabah of Kuwait, Crown Prince of Abu Dhabi, Crown Prince Alexander of Yugoslavia, The King of Tonga, the Crown Prince of Thailand,  Princess Lalla Meryem of Morocco and Prince Mohammed bin  Nawaf bin Abdulaziz Al Saud of Saudi Arabia.

Dubbed as the largest gathering of crowned heads of states since the 1953 Coronation, the Diamond Jubilee Dinner at Windsor Castle was attended by some of the most popular—and most notorious—sovereigns in the world.

The seating plan included 24 kings and queens, one emperor, a grand duke and a sultan, along with eight princesses, an emir and an empress, details Daily Mail.

Prince Hans-Adam II of Liechtenstein was the first to arrive for pre-lunch drinks in the Waterloo Chamber.

Grand Duke Henri and Grand Duchess Maria Teresa of Luxembourg arrived next and they were warmly greeted by the Queen and Prince Philip with handshakes and double kisses – a display of affection that set the tone for many of the welcomes.

King Harald V of Norway kissed the Queen’s hand and she responded with a beaming smile.

Prince Albert II of Monaco was more formal with just a handshake while his wife, Princess Charlene, gave a low curtsey.

Perhaps, the warmest gesture came from Queen Beatrix of the Netherlands, who gave the queen a wide open arms as she approached and gave her a warm kiss.

Meanwhile, The Duchess of Cambridge stole the scene once again with her £1,200 pink Emilia Wickstead dress with pleated skirt. Prince William and she were seen at ease mingling with other royals. Senior members of the British Royal Family were also present.

However, the celebrations were marred by a growing number of protesters in London, outside Buckingham Palace over the coming of the King Bahrain, who was known for repressing prodemocracy movements in his country.